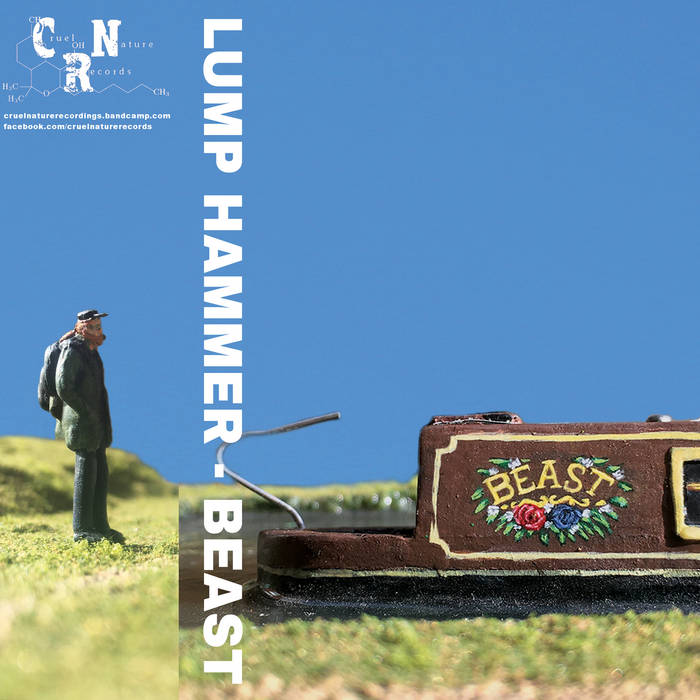 Lump Hammer are a Tyneside (UK) trio with many fingers in the sludge-rock pie and a maximalist/minimalist approach of overwhelming guitar/drums/vox and bloody-minded musical stasis that has seen them perform two hour sets of just one, obliterating song. Purveyors of repetition and compositional claustrophobia matched with dense, fat-bottomed volume.

"If ever a band’s name perfectly encapsulated their sound, it has to be Lump Hammer. The Tyneside trio go all-out on sludgy sonic bludgeoning. Similarly, Beast lives up to its name, with nine tracks and a running time of one hour, two minutes and 48 seconds, it’s a monster of epic proportions, and man, it’s fucking ugly.

‘Alarm’ sounds the album’s arrival in the dankest, grimiest of fashions. A downtuned chord, dense and dirty tears from the speakers gradually picking up pace to become a proper riff, before everything gets truly fucked-up and mangled, as if the mixing desk was suddenly buried in a landslide. It sets the bleak, monotonous tone perfectly.

If you’re after variety, you’ll be disappointed: Lump Hammer’s approach to songwriting consists of taking a simple riff and driving away at it until they stop. Sometimes, it’s a long time till they stop, and sometimes it’s a very long time. The eleven-and-a-half minute closer, ‘Gravy (Beef)’ crawls into the space between Sunn O))) and Earth. Each chord is a whirling vortex of overdrive, its colossal density and mass utterly crushing. The pace is very much in the mid-to-low tempo range, accentuating the monstrous weight of the music. And there are probably words, but mostly Watts’ vocals are indecipherable, elongated guttural growls.

There are some quieter, more subtle moments, as evidenced by the first half of the gloomy nine-minute ‘Where’, which carves a trough of claustrophobic isolation – but it’s all just a protracted build-up to the next megalithic deluge of noise.

With Beast, Lump Hammer continue the trajectory of their two previous outings, the eponymous EP from 2017 and February’s split album with Bodies on Everest: you wouldn’t really call it an evolution, beyond the fact that this time they’ve gone one louder, and over the duration of a full-length outing, the cumulative effect of their relentless grinding trudgery achieves optimum impact. Beast is blunt forced trauma manifested in sound.

‘Beast’ is their first album for Cruel Nature and is available on 2 October as a limited-edition cassette and digital download. The release coincides with the band’s performance at Tusk Virtual 2020 online festival." (Aural Aggravation - auralaggravation.com/2020/09/28/exclusive-album-stream-lump-hammer-beast)