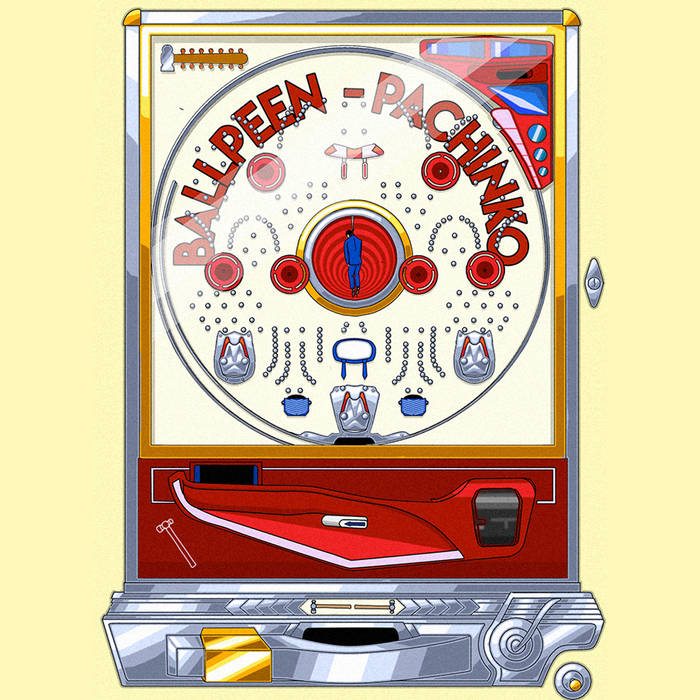 Featuring members of great North East bands such as Tide Of Iron, Grace, Jinn, OZO and Jimmy Floyd Hasselbaind, BALLPEEN burst onto the Newcastle (UK) scene in 2017. Their debut show at Little Buildings was a low-key affair, but their opening performance at the inaugural Brave Exhibitions festival in the same year was a stand-out of the weekend and led them to becoming the festival’s perennial favourite.

With roots in post-hardcore and the dynamism of greats such as Melvins and Unwound, BALLPEEN have looked to capture the energy of their live performances through releases on premier DIY punk label, Serial Bowl Records. 2018’s ‘Loose Knot’ with it’s wry nod to Black Flag in title and excellent artwork, rapped five across the listener’s brow from the get-go, with its attention-grabbing power and undulating groove, coursing through the 6 tracks, leaving you thirsty – but not miserable – for more.

And now you can have more. ‘Pachinko’ (again with mind-blowing artwork from James Watts) is an 8 tracker that blisters along like a wide-eyed frenetic who’s had all the speedballs. With quality production that brilliantly captures the urgency of their live performances, ‘Pachinko’ will delight old and new fans alike. Hardcore will never die.

“ Much as I love living in York because of The Fulford Arms, and the ease of access to limitless gigs in Leeds (without having to actually live in Leeds), I’m starting to think that Newcastle is the place to be.

Cruel Nature’s roster is reason alone, and this latest offering from full-throttle noisemakers Ballpeen is exemplary. Three years on from their first live show and, the band have established themselves, ‘through releases on premier DIY punk label, Serial Bowl Records’. As the press release recounts, ‘2018’s ‘Loose Knot’ with its wry nod to Black Flag in title and excellent artwork, rapped five across the listener’s brow from the get-go, with its attention-grabbing power and undulating groove, coursing through the 6 tracks, leaving you thirsty – but not miserable – for more’.

In attempting to capture the energy of their live performances, Pachinko is a relentlessly balls-out, up front amalgamation of all things post-hardcore, with a big, bold 90s slant that evokes the spirit of Touch & Go and Amphetamine Reptile, as well as contemporaneous little UK labels like Eve Recordings and Jackass.

At times, it feels like we’re wading through endless indie sameness, and even so much alternative music, spanning metal, hardcore, post-hardcore and whatever else you’ve got simply fails to hit the spot, and I’ve felt listless, uninspired many evenings while reviewing these last few weeks. And then Pachinko slams in with a proper smack to the chops and I’m instantly reinvigorated and reminded of all of the reasons for music. Pachinko is distilled excitement. The album’s eight tracks are packed back-to-back and are all the guitars, spasmodic, jolting, big distortion. The fact it’s a mere twenty-one minutes in duration indicates the density and hell-for-leather pace of the album, which last less time than it takes some bands to tune up, or in the case of Sunn O))), to strike the first chord.

Pachinko isn’t pretty: it’s direct, and drives straight for the jugular. Following the lurching drive of ‘One Man’s Opinion’, a thorny mess of Killing Joke and early Therapy? with a dash of Milk, ‘Flipper’ brings a downtuned churning riff assault, before ‘Ornate Coleman’ slugs out a messy morass of guitar-driven abrasion.

Blending Trail of Dead and Blacklisters at their most attacking, or to pluck lesser-known but perhaps more accurate reference points, Tar, Guzzard, and Hora Douse all spin into Ballpeen’s sonic blast.

‘Kancho’ goes full-on Bleach era Nirvana with a driving, circular riff and sprays of feedback bursting from the halts in the crushing percussion. It’s heavy in a relentless, churning way. Some songs, like the closer, ‘No Mark’ are straight-ahead hardcore punishers that are Black Flag and all the hardcore releases Southern Lord have released in the last five years rolled together and deep-fried in breadcrumbs that stick in the throat simply to choke you.

Read the track-by-track rundown from the band on Idioteq, here idioteq.com/thick-riffed-post-hardcore-act-ballpeen-release-new-ep-pachinko-capture-the-urgency-of-noisy-live-shows-listen/

Check out the video to 'No Mark' exclusively streaming on Birthday Cake For Breakfast now - birthdaycakebreakfast.wordpress.com/2020/06/15/exclusive-newcastles-ballpeen-reveal-new-video-for-no-mark/?fbclid=IwAR3irufDRrp6905Wb4q2QFTjjX9WTNmKEkmzgHa3C7NUjfVOpFkQO4SfUE8

Recorded at the Lockup in Hartlepool; Shoe Tree Cafe and Off Quay Buildings in Newcastle upon Tyne.

Art and Design by James Watts