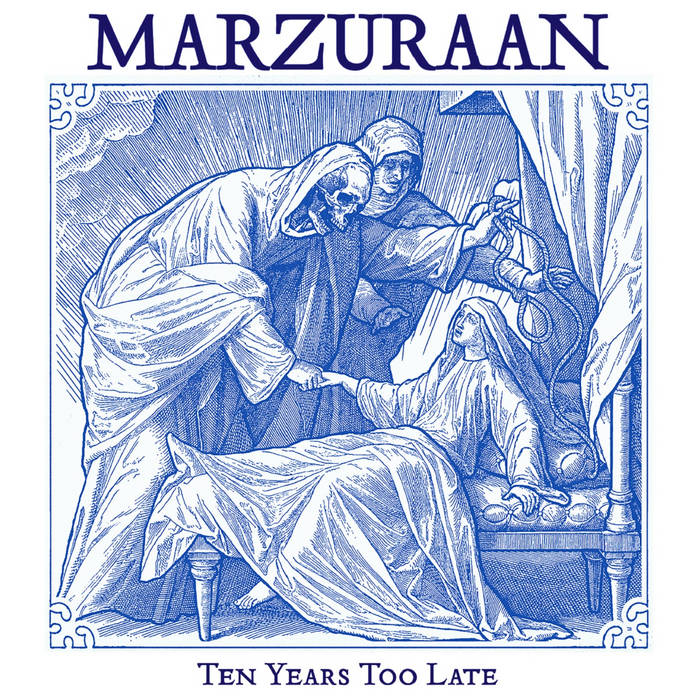 Formed in Gateshead (UK) in early 2002, Marzuraan started out as the duo of Pete Burn (guitar) and Lee Stokoe (bass) before evolving into a full band with the introduction of Rob Woodcock (drums) and Stu Ellen (voice).

Taking their cue from bands such as Melvins; Black Flag; Harvey Milk; Earth; Godflesh and Loop, they soon cemented themselves as a pivotal band in the North East's burgeoning Drone-rock / Trudge-core scene.

Revered locally with a strong cult following nationally, they released 3 studio albums, appeared on countless compilations and split records before disbanding in 2008.

This release presents their final set of recordings, captured at The Soundroom, Gateshead between 2005 and 2006. Remastered by Graham Thompson in 2019, they have sat in the vault, unreleased until now.

"It’s nice that ten years on or more – “too late”, in the words of the title, which I like to think is partially tongue in cheek and partly an honest assessment – Marzuraan can still grab listeners and bring on that feeling of losing track of time together." (Birthday Cake For Breakfast, birthdaycakebreakfast.wordpress.com/2020/03/05/ep-review-marzuraan-ten-years-too-late/?fbclid=IwAR16TKDvWnuh441ReH5ZqFNFgdEptywb2jwiLefHEE-FPuZ9vaqmq7PUCQA)

"Ten Years Too Late shows that Marzuraan were both a band of their time, and a band ahead of their time, sounding utterly contemporary now." (Aural Aggravation, auralaggravation.com/2020/02/20/marzuraan-ten-years-too-late/?fbclid=IwAR07RiVHYuoHFu0-HjPaTeaB_TvixVu6mvI9wb-ZNH2sCIdXUxmWNS6sPNA)

"A fascinating story, the final ever recordings of Marzuraan will finally see the light of day. Six tracks that sound as fresh and relevant as anything the band put out in their short lived heyday." (Games, Brrrains and a Head-Banging life, www.gbhbl.com/album-review-marzuraan-ten-years-too-late-cruel-nature-records/?fbclid=IwAR0kHT7QkrRY0COQLaKFoeGG-MsT9B5Tf6v1iysgJj_6sUoSxxbyCsxjEBQ)

Track 6 was was released on a split 7" with SINK (Thrashwax / Traqueto records).

All other tracks unreleased.

Band logo drawn by Dave Terry MMIII era
All tracks recorded at The Soundroom, Gateshead (UK) by Evil John at various points during 2006, except Track 6 recorded in September 2005.
Mastering by Graham Thompson 2019
Layout by Pete Burn